Homeschooling is amazing. It brings you these incredible days where you are sure you are a failure one minute, and the next minute you gaze in wonder at the intelligence of your children.

Our school day started out with math (which was surprisingly not painful, considering The Oldest is learning to find common denominators.) Then came English. The Oldest wrote me four synopses about things such as The Midnight Ride of Paul Revere and the parable of the Good Samaritan. Littlest One was doing the same thing she always does: phonics charts, reading from a beginning reader, and then copy work. In two years, she still does not remember that N-E-W spells "new". Nor did she remember the words "would", "oh", or "unto". It was a painful lesson. The kind that convinces you, as a homeshooling mother, that your child will still not be reading when she is entering high school. (Because homeschooling mothers are known for putting undo pressure on themselves, and then buckling under said pressure. It's what we do. We're really good at it.)

But then, life happens. Discussions happen. Over lunch, Galileo's experiment at the leaning tower of Pisa came up. I remember hearing about that in the 8th grade. My teacher telling us that, if we were allowed to climb up onto the roof and drop a bowling ball and a marble, that they would land at the same time. I never did believe him.

Well, we didn't have a bowling ball, but we had a huge bouncy ball and a marble. So we dropped them from the deck, two stories above the ground below, and Littlest One kept watch. Indeed, they did both land at the same time.

From there, I thought I'd be all awesome and explain gravity and terminal velocity. Except that at about that moment, Littlest One (who is SIX!) piped up. "Eventually, everything will go as fast as it can go, and it won't go any faster."

"The balls landed at the same time because they're the same shape. So they push the air away the same."

So what would happen if I dropped a feather and a hammer?

"They wouldn't be the same, 'cuz they're shaped different. The feather makes more friction."

Seriously? I had to look it up. She was right.

"What would happen if I dropped a feather and a hammer and I was standing on the moon?" (The school book told me to ask that. Never would've occurred to me otherwise.)

"They'd fall the same. 'Cuz there isn't any air on the moon, so there's no friction."

I had to look that up, too. How on earth did she learn that? Her sister read something about it in a National Geographic magazine and told her about it. I Googled the video of the Apollo 15 astronaut demonstrating it. They were fascinated.

Why am I doing the teaching here? Clearly, the ten year old is more capable. Granted, I can claim having taught them about friction. We had an awesome time with that one!

Later tonight, she explained the process of amputating a horse's leg due to infection from a dog bite, and then creating a prosthetic leg and teaching it how to walk again.

Um, seriously? Yeah, it was in a book her sister read to her, one Grammy gave her for Christmas. So they were playing "amputated horse leg" in the living room. Because that's what homeschoolers do for fun.

This morning at breakfast, we used the computer to take a virtual tour of the New York Metropolitan Museum of Art. (We just finished reading aloud the Newbery award winner From the Mixed Up Files of Mrs. Basil E. Frankweiler so it fit in nicely.) Using the mouse to move through the museum, The Oldest pipes up, "Look! There's a model of Brunellesci's dome!" Ehhh... huh? She looks at me like I might be stupid. "Brunellesci. The Renaissance. Remember?" Uh... yeah, no. But apparently I read something about that to her once. Glad to know it stuck.

Homeschool is incredible. Stressful, and difficult, but incredible. They spend so much time delving into subjects that interest them, and then sharing those subjects with one another, playing them and discussing them and pondering them. The teaching that I do hardly touches the amount of learning that they do, through each of those mediums.

So about that trouble with reading? I'm pretty sure it'll come. Some day there will be a book that details the discoveries of some great inventor or scientist, and she's going to be desperate to know what it says, and she's going to read it. The hardest part of homeschooling is letting go of the standards and goals you've got in your mind. Because you can set as many standards as your heart desires, but your kids aren't going to meet them the way you planned for them to. They'll get there in their time, taking their route, and achieving so much more along the way than you ever could have even imagined.

Where does your meat come from? 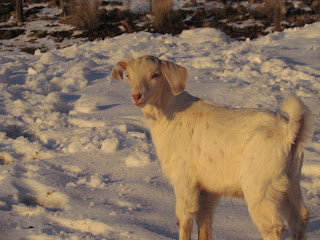 Good golly, was he ever cute. Long floppy ears and the most playful personality I ever saw in a baby goat... granted, he was also the first baby goat I ever saw.

I won't ever forget that night. 7:45 on a frosty cold evening in late January, we knew Justice was getting ready to kid. By the time we went back out, there were two tiny baby goats on the ground. And this li'l guy, being the oldest, walked right up to us. I actually shed some tears that night - the awe of a perfect birth, the beauty of a mama goat instantly loving her babies, the smell of a newborn kid... it hit that emotional soft spot in me and made my eyes well up.

But reality does have to set in here up on our little farmstead. And reality dictates that we don't get to keep every cute little furry animal born in our barn.

Here's the thing with milk goats - if you want to milk them, they have to give birth. Every. Year. And they don't often just have one baby. We've got three milking does in the barn right now that are all due in about six weeks, and each one will very likely have two kids... which means six new baby goats to love... and feed.

When you're trying to live the way we are, sometimes not-so-fun decisions have to be made. Decisions that involve animals that are really cute and fun to have around, but don't serve any other real purpose. It was time for Phillip to serve his purpose as a wethered goat.

Come to find out, though, The Daddy and I are a little more sensitive than we might readily admit. And slaughtering the goat that we and our kids have loved for the past year just wasn't something we were looking forward to. So for fifty bucks, we let the local butcher take care of that job. As I type, Phillip is awaiting his fate in a pen behind the local gas station. (Because apparently in small towns, gas stations keep pens in the back for animals waiting to be slaughtered, and no one finds this odd.)

When we get him back, it will be in the form of hunks of meat, which I will then grind and make sausage. My hope is that once the soft, floppy ears and fuzzy winter coat are left behind, I'll be able to see it only as meat, and not as an animal that we once watched romp on the mountain (or jump into a freezing water trough.)

Will I still feel sad? I'm sure I will. But here's the thing: there's something so ultimately valuable about watching an animal grow up, feeding and caring for it every day of its life, and then eating it. There's nothing that can make you appreciate your food more than that. So yes, while I'm sad, and feeling pretty darn guilty, I'll be glad to know that he had a wonderful life full of fresh air and sunshine and ear scratches and animal crackers. I'd rather have that sustain me than meat from the grocery store that never had a face. I think every meat eater should have to experience these feelings a time or two in their life. If that were the case, we'd have a lot more folks who really appreciated the fact that an animal died for their sustenance. (Or, we'd have a lot more vegetarians.)

So today we'll keep ourselves busy, probably stay out of the barn for the most part, and try not to think about what had to happen. And we'll look forward to the birth of new animals this spring - a calf and many kid goats, along with a few batches of poultry. And we'll look forward to having sausage with our eggs for breakfast in the morning, and homemade pepperoni on our Friday night pizzas.

Nope, not the best day we've had our our little farmstead, but one that dutifully reminds us that this crazy life we're living isn't always going to be emotionally easy... and also one that puts life into very real perspective. I'll take the value of that lesson over 'easy' any day.