The Oldest is an exceptional reader. When the time came to teach her to read, I went through the letters of the alphabet, talked about long and short vowel sounds, taught her some basic blends (ch, sh, st, etc.) and off she went. Like me, she read her first real chapter book at age seven. At age nine, she read a book that was 780 pages in less than a week. She devours several books a week now - never will you find her without a book nearby. And when she isn't reading, she's writing. She's written several ten or twelve page short stories, complete with beautiful descriptions and fantastic word choices.

Because of all this, I assumed that this must mean I'm an exceptional reading teacher.

Then the time came to teach Littlest One. That's when I realized it: I'm not an exceptional reading teacher. The Oldest is just an exceptional reader. I know this because I'm a terrible math teacher and yet Littlest One is flying through her grade in math and I know perfectly well it's no thanks to me. On the other hand... she's a very average reader.

I find myself saying, "Please just read all the letters, in the order they are actually printed on the page," at least a dozen times every reading session. Or, even though she learned it in kindergarten, I'll have to remind her that o and u together say "ou" a million times over. She opens a book and stares at it as though it's filled with a hodgepodge of unfamiliar symbols, jumbled together all over the page just waiting for her to try to make sense of it. I convinced myself she must be dyslexic. Maybe she was having vision problems. But no. When I researched it, what I found was... she is doing all the normal things kids do as they are learning to read. She guesses at words based on a few more familiar letters and the context of the sentence. She gets confused by the fact that each letter has at least two sounds (and let's not even talk about the letter 'y'!) She's making me realize that English is a God-awful language to try to read and write. Add to that the fact that she's a perfectionist - she hates making mistakes in front of anyone, even me - and reading is just not that much fun for her. She also has a sister who will always read something for her, so why should she learn to do it for herself?

I've tried every motivation tip Pinterest has to offer. I've worked diligently on my patience - because saying over and over, "No, n-e-w does not spell now, e-w says 'oo' so the word is new," really starts to wear on one's patience after awhile. I've tried several reading curriculums. I've tried leveled readers from the library. I've tried phonics curriculums and phonics games and sight word charts. For two years, I've felt like I was banging my head against a brick wall... similar to how it felt to teach the Oldest her math lessons when she was this age, actually.

It was The Oldest that finally solved it for me, or at least started the process. She gave her little sister an abridged audio CD of Black Beauty; it has full paragraphs from the book but is shortened quite a bit. Littlest One listened to it about fifteen times. Then she came to me one day and handed me the unabridged book she got off the school room shelf. "This is what I want to read." She announced it in no uncertain terms. I looked through it. My thoughts were something like, "Kid, you can't even read the word 'new' and here you're wanting to read a seventh-grade level book written in 1877 in old fashioned English. You're crazy." What I said was a little more gentle: "Sweetie, this book might still be a little difficult. Why don't we stick with your McGuffey's Readers until you're ready for something a little harder?"

She opened the book and confidently read aloud, "The first place that I can well remember was a large pleasant meadow with a pond of clear water in it."

That was all the convincing I needed. For an hour we sat there on the living room floor, working through Chapter 1.

Our reading lessons have changed now. If a word is too difficult, I help her through it by pointing out the blends she knows and teaching her new ones. Then I write it down in a notebook. At the end of the lesson, she writes each word in the notebook five times and we practice reading them all aloud a few more times. We're still doing second grade phonics and spelling as well, but we're on chapter six of Black Beauty now, and she's even starting to read with some inflection.

Apparently all she needed was a good horse story. 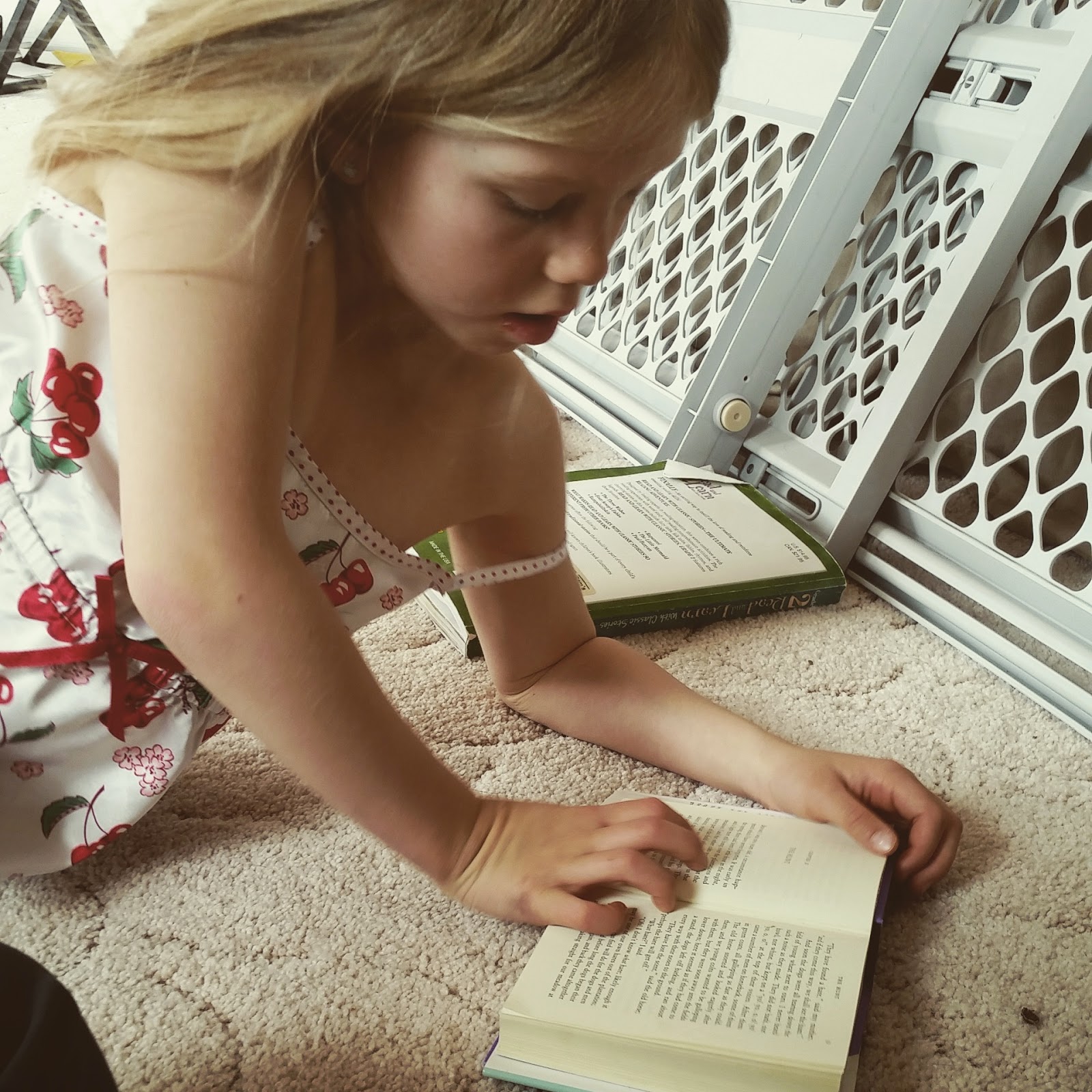