I laugh every time I think about how I swore I'd never be a horse mom. I just spent six hours outside in 90 degree heat watching kids run around in circles on horses. I smell like sweat, sunscreen, and horseflesh. And I wouldn't trade any of it for the world.

My little horsewoman rode in her first gymkhana of the year on Fanny, the new horse. Fanny's never done anything like this before. Even after tons of practice sessions, she still couldn't figure out what on earth we were doing, making her stand out in the sun for hours on end, only running around in the arena once in awhile. She wasn't altogether pleased with the situation.

It was a rough day for Littlest One as far as gymkhanas go. She didn't place in any of the five events. Her horse - even after hours of practicing - didn't do everything perfectly. But despite that, I'm gonna call today a success. My mama-heart couldn't be more full with pride and awe.

There were twelve kids in Littlest One's age group. She was the youngest. The oldest was four years older. While she didn't place, she was only two hundredths of a second too slow in two of the events to place. Through it all, even when her horse wanted to do something entirely wrong, she stayed patient and calm, she followed through, and worked like a real horsewoman to get Fanny to listen. Those two are an incredible team. This is a learning year, for both horse and rider. And while I wouldn't have chosen rodeo, everything in me is so happy when I watch them, when I see my little girl's character growing by leaps and bounds, when I see her sportsmanship and good attitude and that big, beautiful, missing-tooth smile as she races back to the gate.

It was a really, really great day.

For posterity's sake, her times today were (in seconds):

*Can't remember the name of this one. Two barrels, up the center, around the first barrel, straight across, around the outside of the second barrel and back to the gate through the inside.
Posted by Julie at 1:31 PM No comments:

Rodeo Season is Upon Us.

I wrote this a couple of weeks ago, never got the right pics to upload, and set it aside. It's still missing good pics, but I better go ahead and post it...
>>>>
So, it's not winter anymore.

I realize y'all probably know that, but somehow that reality has only struck me this week. We went from a cold, dreary, rainy May to 90 degrees on the first of June. Well, hello, Summer. It's nice to see you again.

After last summer, I swore I never wanted to see another horse or chicken as long as I lived. There would be no more hauling livestock all over the county every weekend because I was D-O-N-E. And then winter happened. We ate a lot, sat by the fire a lot, played games, rested. And now suddenly all that livestock hauling doesn't seem so bad. In fact, the idea is sort of appealing.

For the past three days, Littlest One has been working with her newest horse, Fanny. Fanny is 1200 pounds of energy, horse hair, and love. After a summer of searching we happened upon her, and she's a dream come true for Littlest One. And in four days, Fanny will make her debut as a rodeo horse.

When we got her, she didn't load in a trailer. She hadn't been in an arena and had never circled a barrel. Honestly, she didn't even neck rein (read: steer.) But she was one of those horses that you could just tell was good. She's sweet and patient and she wants to learn and please Cora.

In the very few months Cora's had to ride her, they've come such a long way. She walks right into the trailer usually.) She reins beautifully (most of the time.) She turns barrels and weaves poles and even carries a flag now (which is a pretty big deal - flags are scary to horses.) She's as close to ready as she'll ever be to start running races.

And ya know, she probably won't win. She's faster than Angel is, but she's not that fast. She reins, but not always perfectly, and her turns are way too wide. The thing is though, it just doesn't matter. I've gotten to watch my seven year old daughter take this horse from never-been-in-an-arena to barrel racing in six months. I've watched them form this bond that's just so precious. I've watched Cora get frustrated and angry, gather herself back together, and try again. Cora stands outside and calls her name, and Fanny comes walking up. She loves her girl - you can see it in her eyes. They trust each other. They thrive on working hard to figure things out. And it's beautiful. Not always perfect, but beautiful.

So four days from now, my rodeo-mama heart will jump into my throat as she leaves the gate for her first real barrel run. I'll cheer like a fool, jump up and down, and no matter what happens, I'll be proud of her. She's done this,. This is all hers. 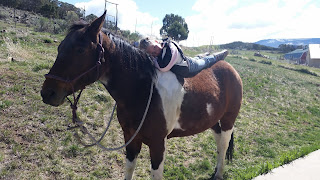 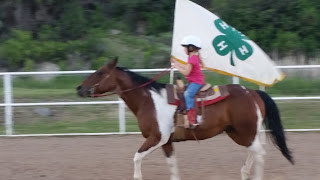