And the rest of the new chicks on the block..

We visited a hatchery today. We drove two hours to get there and called it a homeschool field trip. I'm pretty sure they learned some things. Definitely biology... maybe history, and definitely math. Plus some social skills. Yeah, I think we can call it school.

The Oldest is doing poultry for 4H this year. She needed some chickens to show, and wanted some breeds a little different than what the feed stores were offering. This guy had just what we were looking for, and was full of information about each breed. He walked the girls around and told them about each and every chick he had, and helped us pick out just the right ones. 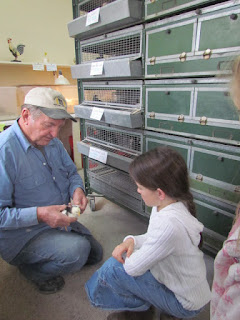 And so, in no particular order, I introduce our newest chicks. Most of them are worthless as far as egg production goes. Some will likely be roosters, as most fancy breeds are straight run (meaning they haven't been sexed.) But they're cute, and they're fun, so we'll enjoy them. 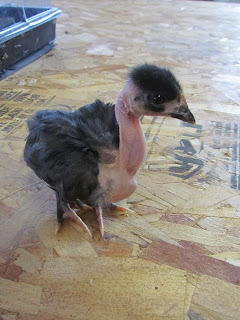 If you've read my previous post, you've already met Geraldine the turken. I'm hoping she grows on me. She's kind of like a train wreck... you just can't help but stare. 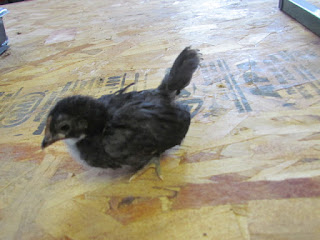 This is Mulan, a Japanese bantam. (Note: We have given them all female names, as if somehow this makes them more likely to be hens. That's how we ended up with a rooster named Tinkerbell last year.) 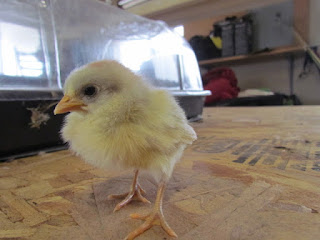 Marian, a Blue Splash Old English Bantam. (Named after Maid Marian, from Robin Hood. Should she begin to crow, her name will be changed to Robin Hood.) 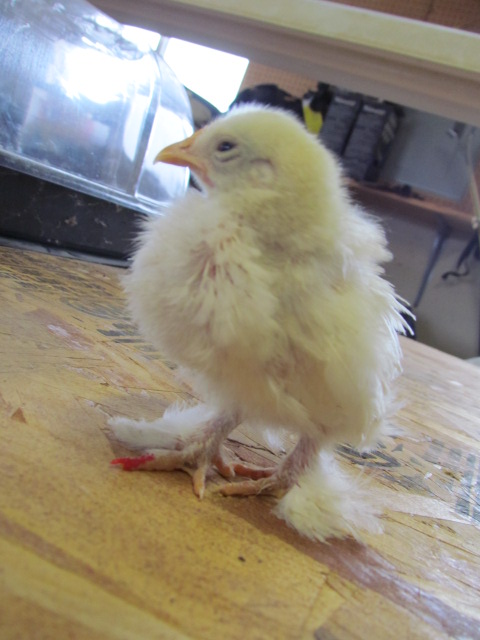 This is Comet, a White Cochin Bantam. (Yes, we got a lot of banties. They are easier for kids to handle, and The Oldest will have to be showing them all at fair.) 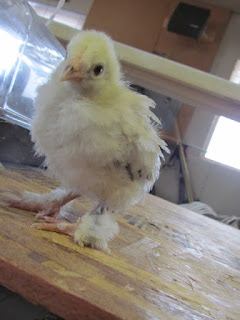 A Light Brahma, as yet unnamed. 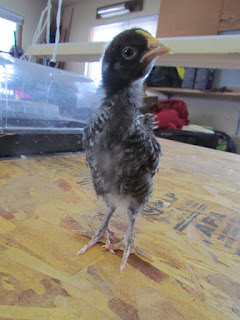 And Cupid, the Cuckoo Marans. 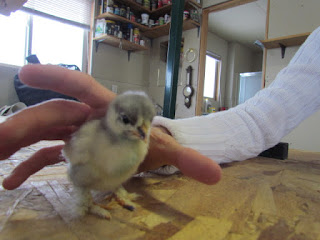 Of course, I couldn't leave without picking out a few of my own. This is Betty Blue, the Blue Cochin Bantam. I picked her because Cochins are known to be broody, and I'm all about having a broody hen do the work of raising chicks. And I really like blue chickens - it seems novel. 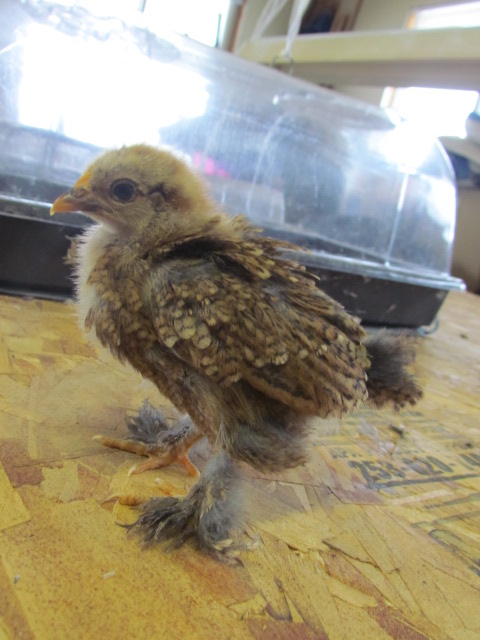 And Phronsie, a Partridge Cochin. (Bonus points to anyone who can tell me where that name came from!)

I also got my own Cuckoo Marans, named Jemima. Marans are known for laying eggs in a deep, chocolatey brown color, something we don't already have so it sounded fun.

These, along with the Blue Silkie and the Mille Fleur bantams that were added to our flock a week or so ago, and we should be set for chicks this year. We're looking forward to seeing what they look like as they grow up - should be a pretty flock when all is said and done!

I have always wanted to visit a hatchery. I really enjoyed looking at your new chicks. I love my Cuckoo Marans. They are such a gentle chicken.

Did you share The Five Little Peppers with your girls? You rock.
I actually know a Phronsie, also named from the books.
BTW, the word verification thins is a pain.

Bonus points go to Jan! Yes, we just finished The Five Little Peppers - they loved it. :-) How neat that you know a Phronsie in real life, I thought that name was just so sweet.
I'm sorry about the word verification. I was getting 10-15 spam comments a day, and it was getting frustrating. Some of them had pretty yucky stuff in them. The word verification has completely done away with it.

Farm Girl - we are so looking forward to having the marans. I've wanted them for years, and was excited to find them. I found this little hatchery by calling around to local feed stores - might be worth a try?
Thanks for stopping by! :-)