I promise I have an excuse for neglecting my blog lately.

Stuff like this skirt for Chloe, who chose the fabric herself. 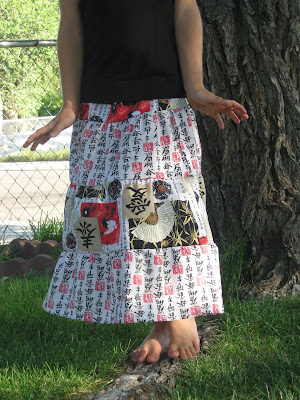 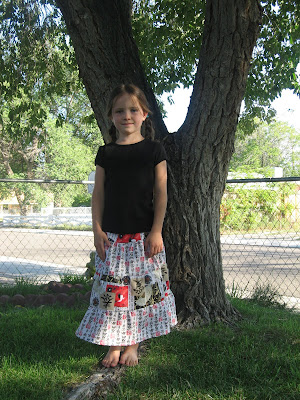 It tickles me to see how her fashion sense is developing, the fabrics and colors that catch her eye. She's insisted I sew nothing but skirts for her this winter. Since she's seven, and frequently forgets how to sit like a lady, they're going to be long skirts. Of course, long skirt patterns are hard to come by for little girls, so I made one up. The only long skirt/dress pattern I found looked positively homeschool.

Stuff like this capelet, also for Chloe, who chose the yarn for herself (nothing I ever would have picked, but she loves it.) 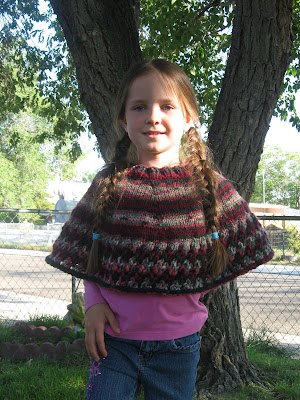 Pattern: Kiddie Capelet by Christine Buhagiar
Yarn: Loops & Threads Charisma
Needles: every size of circulars imaginable.
Alterations: None really - using the bulky yarn instead of worsted made this bigger than the original pattern, so it fits her nicely. Probably could've made it longer, but I was running out of yarn.

Stuff like this hat for myself, which was definitely not easier than it looks. 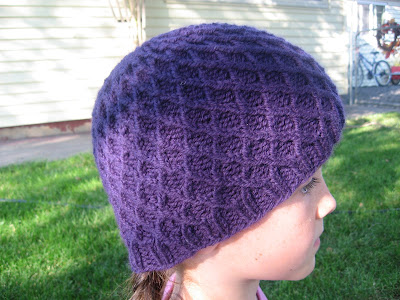 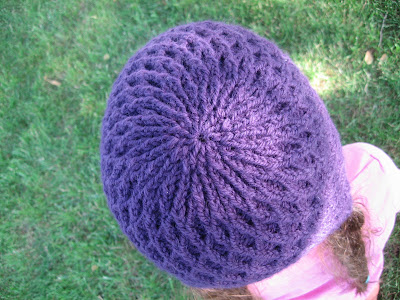 Yes, Chloe's modeling it. I tried fifteen times to take a picture of myself in the hat, but I'm not that smooth with the camera. I don't know how teenagers do all those self-shots they post on Facebook.

With 104 stitches, every single stitch cabled, it took a little longer than a hat normally takes. And why I chose the color purple, which sort of makes me want to gag, I really can't explain, except to say that I had the yarn in my stash and it needed to be used up.

Pattern: Koolhaas by Jared Flood
Yarn: Patons Merino in an obnoxious shade of purple
Needles: 6 and 8
No alterations, followed the pattern exactly, and it turned out great!

I also made another winter hat for my husband, who risks freezing to death in North Dakota this winter (where it has already snowed!) I didn't get a picture of it before he left again, but that's alright. It looks like every other hat I've ever made for him: simple, plain, utterly boring, and completely functional. I used the Hat Fit For a Boyfriend pattern by Stephanie Nicole, the same pattern I've used for the last three hats I've made for him. He seemed happy with it. I was tempted to add some stripes, but I fear that would've been far too exciting for his taste in wardrobe accessories, so it's just a plain not-quite-black. Love you, honey. Your sense of fashion suits me just fine. Except when I'm in the mood to be creative.

So that's what I've been up to. I spent an hour tonight cutting out the seventeen pattern pieces for Cora's Halloween costume. Yeah, that's gonna be a project that could keep me entertained for weeks.

Love all your knitted and sewn projects! Your little model is very beautiful!

all your work is beautiful! I can't wait to see what you're working on for Halloween.