We have toys. Lots of them, in fact. But my children are so much happier with other things. A basket of laundry, for instance: 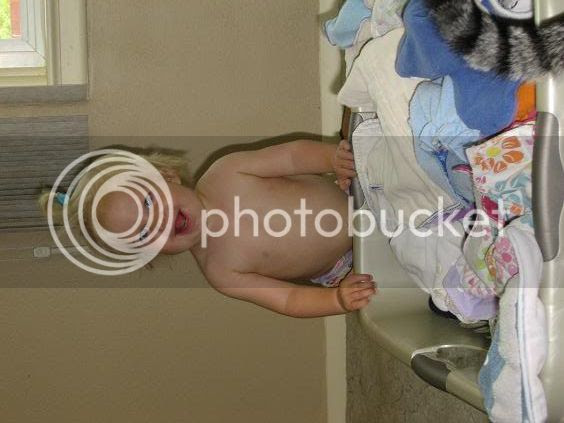 Who knew a basket of clean diapers could provide such entertainment? (Please pardon the cat tail in the picture. LOL)

Or two sticks, with a few ribbons tied onto each - a full hour of dancing, leaping, spinning and twirling came from this. 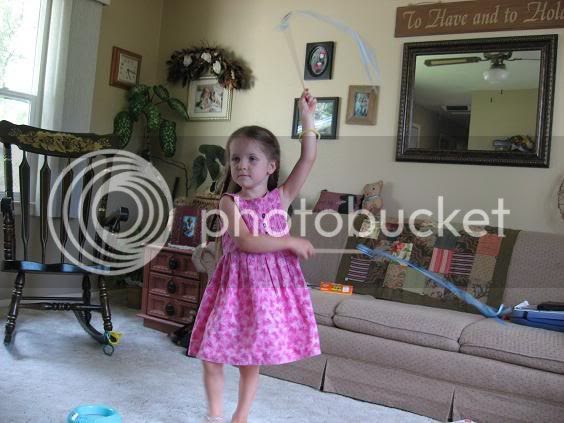 It's so funny to me what really makes kids happy. Mine are proof that no child needs hundreds of dollars' worth of toys to pass the time. I think it's us as parents that want all that stuff!

I started knitting again. I'm knitting a sweater called "Beachcomber" from _Rainbow Knits for Kids_. I'm using some chenille yarn I got at that yard sale. The sweater is cute. The actual knitting of it is about as much fun as a trip to the dentist... to have several teeth pulled. I got about 10" into it and realized I was only supposed to go 7, and tried to rip it back three inches. With the miserable stitch pattern (m1 12 times in one row, it's not easy!) there's no way to pick your stitches back up after you rip. So I tore the whole thing out and started over. Now, it's a challenge, and I WILL finish this thing. I don't even really want to now, but the yarn is taunting me and tormenting me and I must prove to it and to myself that I WILL WIN. ;o) 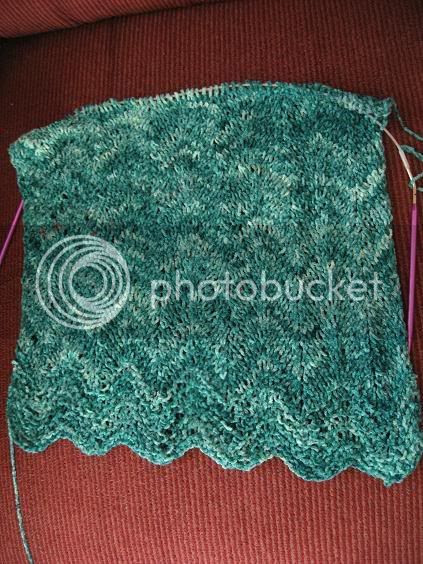 It's going to be one of Cora's Christmas presents. It's going to take an obscene amount of patience, but I will prevail.

Not much to report in the gardening arena. I'm already losing my big tomatoes to blossom end rot, the same problem I had last year. Someone in the organic gardening forum suggested giving my plants a good dose of powdered milk, so I did. Let's hope it clears the problem up. I hate losing good fruits and veggies. :-( The grape tomatoes are doing wonderfully though, and I had some in my salads at lunch and dinner yesterday. Yum! I've still been planting seeds - the beans are coming up, every single one of them this time. The swiss chard is sprouted too, and should be followed closely by the lettuce and spinach. I planted carrots a couple of days ago, but they take a couple weeks to sprout, and I'm worried I won't be able to keep the soil damp enough for them. Sowing seed in the dead of summer is hard work! I'm out there three or four times a day just watering them. It pays off though, when you see those happy little leaves first pop through the soil.

I ordered a few packets of seed from rareseeds.com, the Baker Creek Heirloom seed company, and I'm looking forward to seeing yellow beets and purple radishes.

Chloe's started first grade now.... How on earth did that happen? I had some Kindergarten workbooks, and we were taking a break from them because they were getting difficult toward the end, and she was frustrated. That was a couple of months ago. When I cleaned out her school supplies box, she grabbed them and started working on them again. She finished them all this time. So we went down to the school book store and picked up some first grade stuff. She got through about the first 10 pages in each book without needing help, so it looks like this is the right level for her. Technically, she should be starting kindergarten in the fall. Crazy.

I only use workbooks and such for language arts and math, and we do plenty of non-workbook stuff too. For science, history, social studies and whatnot, I'm not even really doing any teaching. She's well ahead of what kindergarten requires, just from living an interesting life and asking questions about it. Part of me feels like I ought to slow her down, but really, what am I going to say? "You're not allowed to learn anything new for awhile, you're too far ahead of other kids your age." Heh. right. So, first grade it is, I suppose.

One last shot of my cutie-patooties and then I'm out of here. 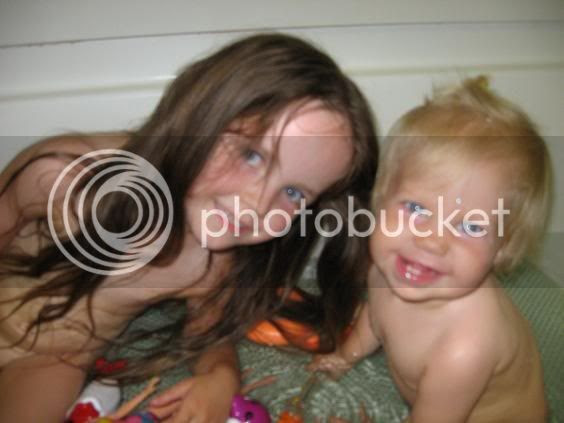